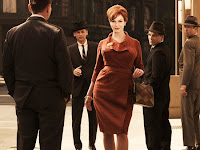 There were two (count 'em, two) True Blood actors in Sunday's episode of Mad Men: Don's occasional date, Bethany (who played the vamp-hating preacher's wife on TB) and Sally's school counselor (who plays Jane Bodehouse on TB). Of all the shows to overlap! I never would have expected the '60s ad agency to poach talent from the southern gothic vampire town, but then again, I never expected anyone from Angel to be on Mad Men, either, and yet we have Pete, who obviously rules.

(Know who I'd like to see cross over? Jason. Freaking. Stackhouse.)

Next up: Poor Sally. For some reason I'm usually a Betty apologist but she finally, finally crossed the line with me (probably long overdue), and her treatment of Sally immediately gave the episode a 3 out of 5 razor blades on the Depressing Scale (tm). A slap? Really? For cutting her hair?!

Roger Sterling's cringe-tastically appalling performance with the Japanese clients adds another .5 because even though he was a total jackass I also felt bad for him.

1. Everything Mrs. Blankenship does, especially announcing people long after their arrivals, and this priceless exchange about an incoming call:

2. Don's complicated bluff against his rival

3. The Honda businessmen ogling Joan ("How does she not fall over?")

4. Don opening up to the secretly-not-married focus group woman
at 9:32 AM No comments:

1. Taken my car in for a smog check
2. NOT parked in a tow-away zone
3. Blogged, Facebooked, Tweeted, returned emails, etc.
4. Vacuumed
5. Ridden my bike
6. I dunno; paid the bills?

Things I Actually Did:

I guess that's how it goes sometimes. And it feels pretty good.
at 9:42 PM 2 comments:

Email ThisBlogThis!Share to TwitterShare to FacebookShare to Pinterest
Labels: writing

Actually, this was the least depressing of the season so far, and also the best Peggy episode in ages. I give it 2 out of 5 razor blades on the Depressing Scale (tm) because most of the time, I was laughing -- but then suddenly cringing in horror. Most of the sad parts were also hilarious, and most of the hilarious parts were also sad.
Case in point:
1. The sobbing focus group (from which I drew the title of this blog post, courtesy of a perplexed Freddy)
2. Pete using his unborn child to essentially blackmail his father-in-law
3. Don's beleaguered secretary throwing things at him
4. Don's unfinished, pathetically drunken apology letter (how weird was it seeing Don type?)
5. Don's ancient replacement secretary, Mrs. Blankenship
6. The return of Cosgrove!
And there were things that were ONLY sad:
1. Pete and Peggy, and their rarely referenced baby
And things that were ONLY hilarious:
1. Peggy standing on her desk and peeking over the wall into Don's office
2. Peggy's new bohemian art friends
As for the nudity warning at the beginning of the episode, my husband and I speculated about what to expect ("Will it be depressing or happy nudity?"/ "It won't be one of the series regular women or it would've happened already -- so who's the poor guest star?" / "Will it be in an ad?") but didn't quite guess correctly. Alas, it was in a photo.
at 8:48 AM 3 comments:

Basically, there was cancer. So that automatically gives the show a base rating of 3 out of 5 razor blades. And then Joan and her husband were kind of depressing, and Lane Pryce spent New Year's Eve with Don and some hookers. So, yeah. Welcome to 1965.

In other news, I spent Saturday evening watching Lady Gaga videos on Fuse, hanging out with a writer pal, and analyzing my new TV obsession. Can that be every day?
at 9:22 PM 3 comments: 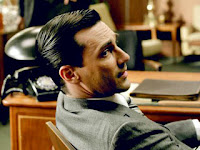 GAH, the season is young but we've already reached 4 out of 5 razor blades on the Depressing Scale (tm), and it probably would have been 5 out of 5 if this episode had actually aired at Christmas. So, yes. Welcome to the Christmas episode. Won't you enjoy some eggnog and cyanide?

Sterling Cooper Draper Pryce is forced to throw a Christmas party to appease their demanding, obnoxious client (singular), and if that's not uncomfortable enough, the forced cheer is accompanied by a forced Santa-ing.

We also saw the return of Freddy (the drunken pee-er, now 16 months sober) and That Weird Kid, Glen, who was corrupted by Betty (or something?) back in season one and is now corrupting Sally by explaining over the phone in poorly lit rooms about the ways of mothers and stepfathers. In an odd display of adolescent chivalry, Glen and his friend trash the Draper house after Sally says she hates it there. They don't touch Sally's room, however, and they leave her a little gift of a bracelet. Weird, but almost cute, too.

So at this point in the episode, nothing is THAT depressing, right? I mean, it's kind of depressing, but there were still a handful of yuks: the Christmas party conga line, the Roger/Joan flirting, the shaky icing.

See, Don is not supposed to be that guy.

In the pilot episode, he is specifically not that guy. He is kind to Peggy, and that immediately sets him apart from all the other men at the office. Yes, he cheats on his wife, but he's never creepy at work, and he's never creepy with his secretaries, and that's why, in part, we were able to root for him.

But now he's absolutely that guy and it's ugly and sad, for all involved. And the next day he gave the secretary some cash in a card as her Christmas bonus!!! NO!!!

It's gonna be a long season if we'll be spending it watching Don hit rock bottom. And I'm scared to find out what Mad Men thinks is rock bottom.
at 10:41 PM No comments: