My new blogging buddy Sophia the Writer has kindly dubbed me a Versatile Blogger. What does this mean? It means, among other things, I get a purty award to display! 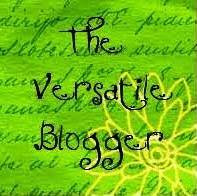 It also means I have a mission to fulfill.

The rules for this award are:
Seven Random Facts About Me:


1. My mom's side of the family is British, and my mom was born and raised in Lusaka, Zambia. When I was 16, I spent part of my summer there. My aunt still lives in Africa.

2. As kids, my older sister and I didn't play "Barbie and Ken"; we played "Diane and Charles." (I don't know why she was Diane instead of Diana. Maybe we thought the name Diane was more American?) BUT YES, WE ARE EXCITED ABOUT THE ROYAL WEDDING TOMORROW. WHY DO YOU ASK?

4. My husband thinks I have an iron stomach and fears for me. I can eat expired or otherwise "bad" food and drink and somehow emerge unscathed.

5. When I was in junior high and high school, I kept detailed notecards about every Cheers episode I saw, including my favorite quotes.

6. In 2008, I was in a car accident that shook me up so much I rode the bus everywhere for 3 months. In L.A. this is considered eccentric. It sometimes took hours to get places that were normally 25 minutes away.

7. I once modeled in a catalog for chef wear. This is not kinky or a code for anything. It's exactly how it sounds: caps, polo shirts, chef hats and aprons. I think the market was restaurant owners. (I nearly posted pics here but I don't want it to be what pops up on Google images until the end of time. If you'd like to see the evidence, email me, but remember, the photos can't be un-seen.)

Anyone still here after that chilling and sobering glimpse into my past?

To those who remain, here's another confession: I love receiving awards but I'm also kind of a lazy ass who's supposed to be packing for a trip right now, so I'm cutting my mission (more than) in half and linking to 7 lovely bloggers instead of 15. Did I break the chain? I hope there's no curse associated with this kind of loose cannon behavior, because I'd really love to give a sincere shout-out to the extremely cool writers I've met recently, both online and in person.

1. Sarvenaz Tash and I share eerily, giddily similar obscure pop culture references. She's a generous, super-fun middle-grade novelist and terrific screenwriter. I know because we've swapped scripts! She held a hilarious Geek-Off recently on her blog that made me realize I need to work harder to claim any title of geek. I believe I'm up to the challenge, however.

2. Leigh Bardugo has a suh-weeet sounding YA fantasy novel (The Grisha) coming out next year, and she met up with me in my old 'hood for drinks and laughs a while back. I'm devouring her analysis (of the analysis...) of HBO's Game of Thrones. She also rocks amazing boots.

3. Sarah Maas is another fabulous YA fantasy novelist I had the pleasure of chatting with recently. Her description of her book, Queen of Glass, in which Cinderella is an assassin, blew my mind and made me delirious to get my hands on it.

4. Alyssa Linn Palmer writes luscious Parisian noir and I'm hoping beyond hope to get her take on my WIP some day!

5. Samuel Park used to run a blog called "Daily Pep for Writers" that I really respected and enjoyed. He's shifted his focus, and rightfully so, to publicizing his novel This Burns My Heart, but he'll be reposting some of his best "Pep" discussions soon and I can't recommend his site enough.

6. Kara Lucas delivers thought-provoking and insightful blog posts on the writing process and motherhood, and I think we're a lot alike when it comes to our gut reactions to Twitter and "new media" in general. I'm looking forward to getting to know Kara better and hearing about her books.

7. Kat Brauer is a new agency mate and spiffy YA author who's raising funds for clean, healthy water in exchange for writing critiques from pros. She lives in Japan, which I think is beyond cool!

I feel lucky and blessed to have met so many lovely writers this year. This is an incomplete list, and I hope to acknowledge more people as time allows. Those I've tagged, feel free to claim your award, list your 7 fun facts and award 15 others if you are so inclined. No pressure, of course. And feel equally free to pull a Sarah and pervert the chain by assigning arbitrary numbers to the task.

Email ThisBlogThis!Share to TwitterShare to FacebookShare to Pinterest
Labels: awards, weirdness, ya blogs

Soccer & Writing: When Supporting Players Take Over the Field

When I saw the team lineup for Sunday's L.A. Galaxy game, I was worried and, to be honest, kind of annoyed. I got into soccer last summer because I wanted to follow the further adventures of Galaxy team captain Landon Donovan after his excellent showing at the World Cup.

Impossible as this may seem, I'd forgotten at the time that David Beckham was also with the Galaxy, partially because I'd shunned from my mind the "Posh & Becks" reality show Coming to America, and partially because he was injured for most of last season. I quickly became spoiled by his presence, however, so when he, Donovan, and several of the other Galaxy headliners were absent on Sunday, I panicked. Seemed like everyone good was either suspended because of yellow card accumulations or resting up after injuries. "Aggh, we're going to get murdered," I thought, settling in for an afternoon of pain.

A minute later, however, I was thrilled to realize that A) last year's talented rookie, Stephens, who normally only gets a few minutes per game, would be starting and B) I would get to meet a bunch of players I'd never seen before, who are rarely afforded a chance to play at all.

And guess what? They were fantastic. They beat Chicago 2-1. I find myself allllmost curious how the team would do without its "stars" for the rest of the season.

I had a similar situation with my WIP recently. Having written 100 pages, I realized that one of the smaller roles was the most interesting to me, and deserved a deeper exploration of his motivation and background, especially since the character's relationship with my lead was central to the heart of the story. So I set the 100 pages aside and pulled up my original opening, which included the smaller role earlier on. It's going to take some work to start over, but I'm really excited about this development.

Have any of your supporting roles ever asserted themselves into a larger role? Have they ever taken over the story completely? Did they surprise you with what they brought to the narrative? I'd love to hear how you worked them in.
at 9:48 AM 6 comments:

Today's been dubbed "Support Teen Literature Day"* by YALSA (Young Adults Library Services Association). "The purpose of this celebration is to raise awareness among the general public that young adult literature is a vibrant, growing genre with much to offer today's teens."

There are lots of ways to show your love for Young Adult novels, and I'd like to show my support by recommending some great YA-related blogs. These are blogs I discovered recently, and also blogs I've been visiting for the past year or two:

Email ThisBlogThis!Share to TwitterShare to FacebookShare to Pinterest
Labels: YA Authors, ya blogs, yalsa

Down These Mean Streets a Boy YA Protagonist Must Go

Verrrrrrry interesting discussion at the #kidlitchat (held every Thursday at 9pm Eastern) on Twitter a few nights ago. Among the topics discussed was male POV in YA books, as well as the possible differences between male and female authors' depictions of boy characters.

One Tweeter mentioned that whenever a teenage boy narrator spends too much time describing someone's clothes, it throws him or her out of the story because it doesn't feel real; while I agree to a certain extent, I also find it ironic that in that most "male" of genres, the hardboiled detective story (as exemplified by Raymond Chandler and Dashiell Hammett), descriptions of people's clothing occur frequently.

"She was slim and quite tall in a white linen tailormade with a black and white polka-dotted scarf around her throat. Her hair was the pale gold of a fairy princess. There was a small hat on it into which the pale gold hair nestled like a bird in its nest. Her eyes were a cornflower blue, a rare color, and the lashes where long and almost too pale. She reached the table across the way and was pulling off a white gauntleted glove and the old waiter had the table pulled out in a way no waiter ever will pull a table out for me." (p. 89)

What's brilliant about Chandler is that his description of Mrs. Wade's clothing tells us so much about her character, and not just about her style, or her class position in life, but about the effect she has on others, including the waiter, the narrator (and the reader!). There's a lot going on in that deceptively simple paragraph. Hell, there's a lot going on in the last line of that paragraph.

Here's another segment from the same book (Vintage Crime edition):

"He wore a gray tweed suit with no padding. His shoulders didn't need any. He wore a white shirt and a dark tie and no display handkerchief. A spectacle case showed in the outside breast pocket. It was black, like his shoes. His hair was black too, no gray at all." (p. 230)

This description of Harlan Potter, an older, obscenely wealthy man, tells us that Potter is apparently virile, too; his shoulders don't need padding and his hair has no gray in it.

The Fedora Lounge offers some more examples of clothing description in Chandler's work.

Would a teenage boy notice someone's clothing and relate it in such detail? No, probably not. But I thought it was interesting that today it might be an indicator of something amiss in a male voice, when in the 1950s it was a common and effective tool.
at 9:43 AM 14 comments: