According to Wikipedia, it took nearly 10 years for writer/director Christopher Nolan to bring Inception to the big screen. He wrote the idea for Inception in 2001 but didn't think he was ready to tackle such a large project at that stage in his career, so he waited until 2009 before revising the script and selling it to Warner Bros.

At first I thought it must have been agony for him to wait that long to do his "dream" project (har) but actually... nine years is not that long. And it's not like he was idle all that time (ahem, Insomnia, The Prestige, Batman franchise), just biding his time and learning how to direct projects that were bigger in scale than his mind-bending feature debut, Memento.  I think it was smart of him to wait, and rather inspiring.

Depending on what you're writing, nine years of development is not unheard of, especially with historical fiction. Let's say it takes a year to research, brainstorm, and jot down notes for your novel; two years to write the first draft; one year to revise based on notes from family and friends; six more months to revise based on agent notes; six months on submission; another year or two to revise for the editor; and one more year before it's actually published -- BAM! Eight or nine years, in a blink.

The trick is that it wouldn't be the only thing you're working on, of course. You could have three or four projects in the wings, at various stages of development, until before you know it, you've built a repertoire. And with each project, the process is streamlined to go faster. Some projects would only take a year or two. 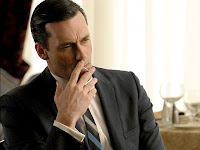 Annnnnd, we're off to a rip-roaring start to the new season of Mad Men. I give this episode 2 out of 5 razor blades on the Depressing Scale (tm). On paper, perhaps, the episode is quite depressing, but there was so much humor mixed in, and I was so excited to see the gang after nearly a year's absence, that I was fairly giddy throughout.

The episode begins with a question. The central question, in fact, of the show's run: "Who is Don Draper?"

To answer it, let's look at the more depressing aspects of the season premiere. Since we last saw him, Don Draper lives in a hovel, yet still pays the mortgage and insurance on his and Betty's old house. Don Draper is irritable, and has no appetite. Don Draper pays prostitutes to slap him. Don Draper is decidedly alone on Thanksgiving. Don Draper gives really bad interviews to Ad Age Magazine. Don Draper's first "real" date (preacher's wife from True Blood! Speaking in the same accent!) since his divorce says, "The world is so dark right now," yet this episode is somehow not, because:

A) Ham! Fight!
B) Peggy has an underling -- and a fake fiance / protector
C) Sterling Cooper Draper Pryce is pretending to have a second floor
D) Pete is as toadying as ever
F) Ham! Fight!
at 12:17 PM No comments:

It's (almost) that time of year again, when I rate new episodes of Mad Men based not on the quality of the show -- which tends to be uniformly high --  but on how suicidal it makes the viewer.

Using a scale of 1 to 5 razor blades, I'll discuss the most depressing aspects of the program. It doesn't help that the show airs late-ish on Sunday nights, when most of us are already quivering wrecks anticipating the work week ahead.

Not surprisingly, my sympathies and biases tend to lie with Peggy and Joan. However, I'm also a sucker for Don Draper's melancholy speeches, especially when they involve the definition of nostalgia.

For a refresher on where we last left our booze-addled pals, who recently emptied out the office in the middle of the night to secretly start a new company, click here. (Aw, remember when Pete and his wife danced up a storm at Sterling's wedding, a la Donald and Daisy Duck?)

Next Sunday night/Monday morning I'll kick things off for the new season.
at 11:46 AM 2 comments:

Why Watching the World Cup is Like Reading a Bestseller

I know, I know, Americans supposedly don't like watching soccer; we don't have the patience; and we don't think the refs' calls are fair. We just play it as kids and then abandon it as adults. And we already have a sport called football that we refuse to swap out.

But I was obsessed this year. I woke up at 6:30 am before work to watch. I planned my weekends around it. I discussed and debated it with other fans. I drove my husband a little bit nuts. I read heaps of articles, Wiki-pages and analysis on the sport and the players. I accepted the vuvuzelas. (Eventually. (In fact, now it seems strange to watch matches without them.)) And I WILL be watching more matches now, L.A. Galaxy's specifically, which is the first time I've felt entitled to root for an L.A. team. I've lived in California 11 years but I still root for Illinois in most sports. Well, no more.

Anyway, I was thinking about why I fell so in love with soccer this time around, and I think it's the same reason I like reading bestselling books: To feel connected to the rest of the world, at a time when society is becoming ever-more fragmented into smaller and smaller subcultures.

There's something wonderful and magical about reading the hot summer item, the one with all the buzz, the book that's been at the top of the bestseller charts around the world for months. First, there's curiosity: "What's the fuss about?" Then there's impatience: "I gotta get my hands on this book!" Then there's that lovely feeling of a shared experience: "Ooh look, my co-worker/friend/random person on the train is also reading it! I wonder what they think??"

At the moment I'm reading Last Call: The Rise and Fall of Prohibition by Daniel Okrent and The Knife of Never Letting Go by Patrick Ness.

What book has got you frantic this summer?
at 8:11 AM 4 comments:

I went home* to the midwest for Fourth of July weekend and enjoyed a great many things to be thankful for. I got to meet my wonderful two-and-a-half month old niece, visit with old friends, hang out with my family, and oh yeah, watch a wild turkey wander around the curb of a busy intersection.

Known as the Lake Bluff Turkey, the oddly majestic creature has received TV news coverage and inspired a Facebook page, T-shirts and bumper stickers. As far as I can tell, it's been there since early June.

Why is it there? How is it still alive? What does it eat? Why has no one claimed it?  Has it caused many traffic accidents, or does it add cheer to everyone's commutes? So. Many. Questions. Also I LOOOOVE the cheesy local news headlines, all "ruffled feathers" and "let's talk turkey."

Heard an intriguing interview last night on NPR (I was in the "good" car for my commute last night, the one that gets radio reception on the 405. Although in some ways it's also the bad car because the ride is bumpy, whereas the bad car is "good" in that regard). Anyway!

Warren Olney interviewed Laurie Ochoa, co-founder of the new quarterly journal, Slake. And yes, it's a print publication. There is paper involved. Over 200 pages of paper, in fact, and it's all about Los Angeles. But not in the way you think; it's not about Hollywood or celebrities. There are pieces of cross-genre fiction, non-fiction, poetry, and what's considered longform journalism; the kind of measured, slower, indepth reporting that's hard to find these days. I'm drooling and have already ordered a copy off Amazon, though it's also available at independent bookstores like Skylight and Book Soup.

For more info, check out this article in Brand X, featuring Laurie and her fellow editor Joe Donnelly, in which Laurie states, "Everyone talks about print being gone already, but it's not gone, it's still here. And we don't want to give up on it."
at 11:08 AM No comments: