Four Places to Win a Free Copy of BRUISED 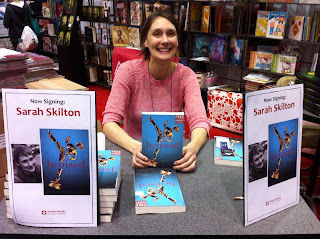 4. And coming tomorrow... a chance from YA Fresh

Thanks to Maja, Tammy, Laurisa, and Tina for hosting these giveaways.

And if you strike out this time, check back here in April for at least two more chances!

Here's what people are saying about BRUISED, my contemporary YA novel, out today:

"Offering psychological drama and an introduction to martial-arts code of behavior, the book has a meaningful message about power, control, and the internal bruises carried by victims." —Publishers Weekly, starred review

"Her story is compelling, and readers will stick with her as new insights bring about a believable shift in her behavior…This distinctive debut will be appreciated by fans of contemporary fiction." —Kirkus Reviews

"This layered first novel explores the aftereffects of the trauma, convincingly depicting why Imogen blames herself for a situation over which she had no control. Skilton also sensitively depicts the bond and tentative romance that develops between Imogen and Ricky. The main story line about Imogen’s struggle to come to terms with what she did (and did not do) is nuanced and honest." —Horn Book

"This is a useful exploration of the difference between fantasy-style omnipotence and the complexity of real-life human strength." —Bulletin of the Center for Children's Books

Happiest of Book Birthdays to all!
at 6:00 AM 8 comments: