My friend and writer pal Kristen Kittscher just started blogging, and she hit a home run her first time at bat. I was fascinated by her inaugural post, about the balance between trying to keep up with the fragmented online world while still maintaining good writing skills and finding time for true contemplation. At least, that's what I got out of it. She spells it out a lot more eloquently.

I'll be interviewing her soon about what it was like to win the YA category of the annual Pacific Northwest Writer's Association in 2009.

In the meantime, her post got me thinking about the differences between talking and doing.

Like most writers, I love hearing how other writers work. What's their schedule like? Do they prefer writing in the mornings or evenings? When does inspiration tend to hit? Do they write longhand, or always type first drafts? How often do they swap pages with a critique group?

The online world is fabulous for learning about and forming connections in the publishing industry, and I never get sick of these discussions. However, sometimes I find that if I start talking, I stop doing. Discussing the process can bleed it dry; strip away the magic from it.

Instead of Tweeting "#amwriting", why don't I just go about it quietly without an announcement? Why don't I turn off my Internet connection and revel in the privacy of creating? Do we fear that if we don't acknowledge something to the world at large, it didn't happen?

Before the Internet, writers were kind of recluses. And I think there was something nice about that, from time to time!
at 9:22 AM 3 comments: 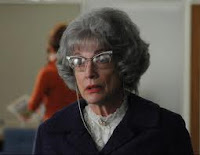 Aw man, I can't believe they killed Mrs. Blankenship. She had some of the best quips and moments on the show. Most recently, she delivered this line to Peggy: "It's a business of sadists and masochists, and you know which one you are."

On the other hand, we got these great quotes as a result of her passing:

"She died as she lived -- surrounded by the people she answered phones for." - Sterling

We also got to see Pete in the background, covering Mrs. Blankenship with a quilt and trying to maneuver her corpse out from behind the desk.

The real heartwrencher of the episode was Sally, who may actually be the best actor on the show. Did you notice that she's picked up her mother's inflections? She uses Betty's same flat tone when addressing Don -- and yet she can also throw a great tantrum and light up a room with her smile. I felt so bad for her when she fell down and no one would help her. Actually, secretary Megan (who kinda resembles Anne Hathaway) was great with her -- and for some reason I sense that's going to have consequences that Ms. Miller won't like.

Sally's devastation at being forced to go back to a home she clearly can't stand puts the episode at a 2.5 out of 5 razor blades for me. It was certainly upsetting, but most of the rest of the show (Mrs. B, Joan and Sterling's renewed relationship) was played for laughs.
at 8:18 AM No comments:

Mad Men 4x8: Betty is still a Child but Don is Growing Up, Awww 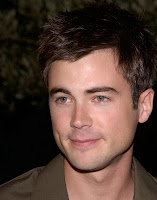 Here's how Time Warner Cable described Sunday's episode of Mad Men: "Peggy and Joan are forced to deal with some rambunctious office shenanigans."

Can you hear the laugh track and sound effects? Wah, wah. I feel for those summary writers, though, because that's part of what I do at my job and it's not always easy to logline something complex. I just used a noun as a verb. It is early in the day.

Still, "shenanigans" implies something harmless and adorable, which is inaccurate; the ladies suffered a lot of crap and verbal abuse. Peggy can never win; especially not with Joan.

Don was looking wrecked at the pool (and did people in the '60s really not notice the correlation between smoking and uncontrollable coughing? He lights up right after his workout) but I loved his (Vampire)diary voice overs and the fact that he's decided to take better control of his life. I like him with the marketing woman, too.

Favorite line: "That was my ex-wife, her husband, and some slob who's about to have the worst dinner of his life."

Although they're not being chased around office furniture anymore, Peggy and Joan do have a rough time at work, probably every day, which I have to acknowledge by giving the episode 3 out of 5 razor blades on the Depressing Scale. On the huge plus side, though, Don is finally getting to a better place and even looked genuinely joyful at his 2-year-old's birthday party.

Farewell, Freelancer Joey's smirk. (Sorry that he got the boot, Amy, but you should be proud: he had a good run.)
at 8:20 AM 2 comments:

You're Finished! Maybe. What Now?

So you've finished your latest revision.

It took time, a lot of brainstorming, some back-and-forth emails with trusted friends and advisers, some sleepless nights, a couple long bike rides or walks, a dash of angst, some cutting and pasting and reconfiguring from old drafts, some creating of brand-spanking-new scenes, and a print-out and a red pen.

You got some more notes and updated accordingly. You finessed some awkward phrases and rewrote descriptions and metaphors. You printed it out again for a quick scan, and at long last you emailed a copy to your agent, your editor, or your critique group.

What do you do next?

I'm torn between all three, leaning toward C.

The past two weeks galloped away from me. Because I'd jotted down notes while watching (Peggy: "It's a relief to see someone worse than me") I got it into my head that I'd blogged it, too, but apparently jotting things down in creepy slanted handwriting on a piece of legal paper while watching Mad Men in the dark does not equal blogging. (Or does it??)

And then the week after that, I was in Arizona visiting my grandparents.

So, let's combine and move on, shall we? First let's talk guest stars.

Jonathan! From Buffy!
Victor! From Days of Our Lives!
Flashback hair!

Let's also give both episodes 3.5 out of 5 razor blades on the Depressing Scale. Sure, Don had a Lost Weekend and woke up with absolutely no memory of the past 24 hours, and that was disturbing, and Peggy had to deal with a surprise birthday dinner she didn't want any part of, but the Peggy/Don bonding was long overdue, and they also discovered Sterling's hilarious book notes on audio.

"Don't read this one too fast. I did, and I regret it." - Sage advice to me from the cashier at the late, great Borders in West Hollywood, referring to Harry Potter and the Goblet of Fire.

Helpful cashier, I take your advice many years later and apply it now to Suzanne Collins' Mockingjay, the third and final book in the amazing Hunger Games series.

Yes, I'm desperate to find out what happens, but I'm even more desperate to prolong the experience. I read Hunger Games in a day and a half, and Catching Fire in one feverish evening, but this time, I'm going to take my time. When this one's over, it's all over, and I'm not ready to let go of the adventure or the characters and the world they inhabit. I don't want to leave them behind.

I love the sense of anticipation I have right now, the not-knowing how it's all going to end, because no matter what happens or how I'll feel about the events of the story, the hardest part for me will be that it's finished.

Oh, to one day publish a book that someone will devour in an evening or lovingly procrastinate over!

(P.S. This is no small feat, reading the book slowly, because my husband's already done.)
at 7:33 AM 6 comments: