Here are 12 Young Adult books I haven't read yet that I'm dying to get my hands on when they're released in 2012 (in alphabetical order by title; summaries from Publishers Marketplace):

1) Breaking Beautiful by Jennifer Wolf
About a young woman healing from the car crash that killed her boyfriend while hiding the truth of their relationship.

2) Fracture by Megan Miranda
In which a girl survives a fall through the ice into a Maine lake and subsequent brain injury, only to discover that she now has a strange and frightening affinity with the dying.

4) Pushing the Limits by Katie McGarry
In which two teens, the school bad boy and a former member of the girls "in-crowd", are brought together by their court-ordered therapist and are determined to discover the secrets of their case files but neither foresaw the shattering consequences of learning the truth regarding their families or of falling in love.

5) Something Like Normal by Trish Doller
About a young Marine home from Afghanistan, dealing with PTSD and trying to find his place in a life that no longer fits.

6) Splintered by Anita Grace Howard
An urbanized gothic retelling of ALICE'S ADVENTURES IN WONDERLAND, in which a sixteen-year-old descendant of Alice Liddell (real life inspiration for the Lewis Carroll novel), realizes the story was true when she is pulled into the darker side of Wonderland to fix the things her great-great-great grandmother Alice put wrong.

7) Starters by Lissa Price
The first in a futuristic thriller series featuring a society where youth is coveted at an impossible price, and one girls' ability to bring it all crumbling down.

8) Struck by Jennifer Bosworth
Set in earthquake-devastated Los Angeles, in which a seventeen-year-old human lightning-rod finds herself in the middle of a power struggle between two fanatical doomsday cults, one that wants to save the world, and another that wants to destroy it.

9) Shadow & Bone by Leigh Bardugo
About a girl who must leave her best friend - and first love - behind to save her country from the growing darkness of the Unsea, but first she must contend with the kingdom's magical elite and their seductive and powerful leader, pitched as Graceling meets Tsarist Russia.

10) The Vanishing Game by Kate Kae Myers
A gothic suspense about a girl who receives a letter from her dead twin brother, forcing her to return to their eerie old foster home and to a guy she never thought she'd see again, in order to prove that her twin is alive.

11) Welcome, Caller, This is Chloe by Shelley Coriell
Pitched as THE BREAKFAST CLUB meets WKRP IN CINCINNATI, in which an ex-popular girl, forced to join the misfit staff of her high school's struggling radio station, dispenses relationship advice on a late night call-in show only to find she has a lot to learn about love, loneliness, and lasting friendships.

12) Madeleine L'Engle's A Wrinkle in Time graphic novel adaptation by Hope Larson, just in time for the 50th anniversary of this classic book! The illustrations are going to be fantastic.

It was almost impossible for me to narrow down the list to 12. Want more? Feast your eyes on the Apocalypsies' upcoming releases and swoon over the delectable artwork in the sidebar.
at 1:09 PM 5 comments:

Email ThisBlogThis!Share to TwitterShare to FacebookShare to Pinterest
Labels: 2012, books, YA Authors

It's time to look back on the year and see what I accomplished. If you're feeling compare-y and contrast-y, check out my Year-End Stats for 2009 and 2010.

"In 2011, my goals are to research, write and revise my newest YA novel, contribute to DearTeenMe.com, give audio books a real chance, and bring actual knitting back to my knitting group. I'd like to go jogging twice a week, and read at least 50 books, partially so I can surpass that goal."

Here's how my checklist turned out:

1. Wrote and revised a new YA novel? Yes!

2. Contributed to Dear Teen Me? Yes! You can read my letter here.

3. Gave audio books a real chance? No! Not even remotely! Didn't even try! Why am I using so many exclamation points! 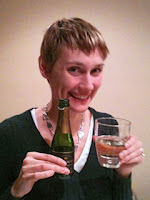 Other Fun Stats (maybe I should've listed these first):

I sold my novel (wooooooooooo!), attended a fun writing conference in NYC (where I got to meet my agent, editor, and lots of cool writing peeps), and joined The Lucky 13s. Lastly, my husband and I have a fresh work-in-progress due early next year. (Before anyone freaks out, the imbibing photo above is old.)

How did your year stack up against your expectations?

Top Five Questions I Get Asked as a Magician's Wife

My husband Joe Skilton has been a full-time professional magician for several years, and whenever I tell people this, they inevitably want to know five things:

1. Does your husband tell you how he does his tricks?

No, and I prefer it that way. If I reaaaaallly want to know, I can scour through his books, DVDs, and lecture notes, or beg incessantly until he throws me a crumb, but I'd rather not know. The few times I've found out the secret to a trick, it's either been a bit of a letdown, or, more often, it's been even more mind-boggling to realize what he's trained himself to do. The tricks he performs are the result of skill and practice, honed over months or years, rather than pre-bought gimmicks from stores.

2. Is your husband always showing you new tricks and ideas?

He stops when I'm sleeping. I used to be more "pure" to him as an audience member, because I was clueless, but now I can spot certain elements at play and point them out from time to time.

3. Do you get sick of watching him perform the same shows over and over?

If I've seen a particular set many times, I'll stop watching him and watch the audience instead. It thrills me to see people's reactions: gasps, "No way!"s, "You did not!"s,  clutching their seats, etc. And it makes me happy that he's made so many other people happy.

4. Are you his secret assistant?

Yes but only secretly! Actually, no, not at all. He doesn't do tons of big stage illusions, and even if he did, I'm not the right body type to be a box jumper (women must be small and limber to fit inside boxes; I'm kind of tall and gangly).

5. What's the weirdest thing about being a magician's wife? (This is my favorite question.)

A) Props everywhere! The other day I saw two perfect peas on the carpet and went to pick them up, wondering how they'd traveled from the kitchen. Then I realized they weren't actual peas but part of a
"pea and shell" game. There are playing cards in the laundry room, office, kitchen, den and bathroom. There are bits of rope throughout the house, as well as antique coins, close-up pads (velvet portable squares perfect for close-up magic shows), and a beautiful wooden magic wand that seems to travel from room to room.

B) Clown insurance. Let me preface this by saying there is no love lost between magicians and clowns. A few years ago, Joe was asked to perform at a hotel in Beverly Hills. The hotel required proof of liability insurance. Since there is no Magician's Alliance (unlike in Arrested Development), he needed to get performers' insurance, fast. The only place that fit the bill was the Clown Association, so he purchased a year's worth, which came with a free subscription to a magazine called Clowning Around. When the first issue arrived, I screamed and dropped the magazine. (Like many people, I have a fear of clowns.) Soon, however, I was hooked. The masthead and columns included pictures of the writers in full clown regalia. Since then, Joe has found another insurance provider that, shall we say, lets him keep his dignity.

C) He works evenings and weekends, so we're often ships passing in the night with our schedules. The holidays are his busiest time of year, so we don't always get to hang out on Thanksgiving, New Year's, or large portions of December. He's got lots of corporate parties, holiday cocktail parties, and New Year's celebration shows he needs to focus on. He's always supported my writing so I don't mind the "ships in the night" schedule or the crazed Decembers but I'm always happy when I get him back in January :)
at 10:54 AM 10 comments:

One-Stop Shopping - A Compilation of "Best of 2011" Book Lists

To be honest I'm still working my way through January Magazine's Best of 2010 list, which was brilliantly categorized by genre, but for those who are a little more up-to-date and looking for 2011 picks (imagine that), I've compiled a wee list of links. Happy shopping!

From USA Today (For people who don't read. "See what books authors, from Laura Bush to James Patterson to Snooki, fondly remember as the best book they ever got for Christmas." (Must I? ;))

From Kirkus Reviews (A list of "Best Teen Books," and they look absolutely gorgeous)
at 9:00 AM 4 comments:

What I Learned From NaNo, and an Interview with Miranda Kenneally

Well hello there. It's been a few weeks! Here's what I learned in the month of November, which I spent revising my latest YA novel:

1. All first drafts are terrible.
2. This doesn't mean they will always be terrible.
3. Research is my friend.
4. Except when it isn't. (Too much can paralyze you.)
5. Knowing I have potential readers standing by was a powerful motivator. I don't want to let them down when the time comes to (gasp, horror) show this puppy to someone else.
6. When writing and revising is going well, there's nothing better.

Admit it, you bloodthirsty sharks: what you really want to know is, did I pass or fail National Novel Writing Month?

I'm going to give a non-answer, and there's nothing you can do about it. (Also, I didn't set out to write a novel, I set out to revise one, but, as they say on those Money Market shows, let's crunch the numbers.)

As I write this post, it's the evening of 11/30, the last day of the month, and I still have 25 pages (out of 250) to edit. So! 90% done, or an A-, but NaNo hard-liners will stamp FAIL on my forehead. However, I'd like to point out that I added nearly 7,000 words' worth of new material that I'm pretty proud of, and around the half-way mark of the month, I stopped hyperventilating / berating myself and started truly enjoying the process, which was a wonderful surprise.

My ultimate goal for the holiday season is to have a solid draft of this manuscript finished before the end of the year so I can get critiques in mid-December and January. On that front I believe I've succeeded. And now the real revisions can begin :)

Over at the Lucky 13s blog, I've posted my first interview for our Apocalypse Now series, in which we chat with 2012 debut authors about their Young Adult and Middle Grade books.

My pal and agency-mate, Miranda Kenneally, has a wonderful contemporary YA book, CATCHING JORDAN, out today. I was lucky enough to read an ARC of this exciting debut over the summer at the RWA Conference.