A few weeks ago I blogged about the new shows I planned to watch this fall, based mostly on whether the programs were in any way connected to Lost.

The pilot episode for Person of Interest -- which is executive produced by JJ Abrams, so check mark there  -- kept me guessing, and all the credit goes to screenwriter/creator Jonathan Nolan (best known for Dark Knight and Memento).

Twist #1: The thuggish weapons dealers from the teaser show up a second time as an integral part of the plot. Did not expect to see them again.

Twist #2: The group controlling the criminals, the group they're terrified of... aren't other gang members but corrupt cops.

Twist #3: The woman our heroes are trying to protect is actually the perpetrator; her colleague's the one in danger.

I didn't see any of the twists coming, and for that reason alone I was very impressed with the pilot script. However, it's one of those shows that requires willful suspension of disbelief.

The show centers on an eccentric billionaire (Michael Emerson) who teams up with a former CIA operative (Jim Caviezel) to prevent crimes before they happen. (How do they know what's going to happen? They receive flagged social security numbers from covert surveillance software created for the government after 9/11. Yeah.)

If you're willing to accept certain elements of the premise without thinking about them too much, it's definitely worth tuning in.

Now back into the editing cave I go!
at 9:45 AM No comments:

There Are No Second Acts in American Lives (Unless You're "Two and a Half Men"?)

On Monday, I intentionally watched Two and a Half Men for the first time (I'd seen it once before at the gym and couldn't escape). I was curious, from a writing standpoint, to see how they would jettison Charlie Sheen's character -- also named Charlie -- after eight seasons on the air, and introduce Ashton Kutcher's character (to record ratings, apparently).

We cold open with Charlie's closed-casket funeral, where a bunch of his ex-girlfriends hold court, excoriating the deceased by listing the variety of venereal diseases Charlie gave them before kicking off. It's revealed that his demise came about in Paris; he was pushed in front of a train and his "body exploded like a bag of meat."

To this, er, surprising revelation, the Half-Man, now a teen at this point in the show's run, pipes up with, "Is anyone else hungry, or is it just me?" [Cue theme song!]

OKAY WAIT. I get that this was series creator Chuck Lorre's turn to bash Charlie Sheen. I soooo get that, but, BUT. Is this really how the character is written off, after eight years? And is this really the kid's reaction to his uncle's murder? He's not even remotely troubled by this information, content instead to deliver a zinger in the teaser.

Charlie's brother (played by Jon Cryer/Ducky) is similarly unconcerned. As for Charlie's mom, she pretends to be mournful for about three seconds, but it's all just a set-up to another punch(me) line; she wants to make a commission by selling Charlie's house as soon as possible.

Dudes, this is America's #1 comedy.

I guess it's just not my kind of humor. Or maybe I've been spoiled by the likes of Arrested Development and How I Met Your Mother and can no longer abide so-called traditional, three-camera sitcoms.

For me, the best sitcoms -- Mary Tyler Moore, Cheers, Cosby, Murphy Brown, etc. -- always had a little bit of heart injected between jokes, those occasional moments of poignancy that are even more effective precisely because they stand in contrast to the humor. Sure, Seinfeld was populated by a bunch of selfish (funny) jerks, but you still believed they were Friends.* Their behavior was still traceable to that of Human Beings on Earth.

A more modern example of three-dimensional characters might be Louis CK's half-hour show on FX, which, while not a traditional sitcom, is, to me, the epitome of hilarious realism. The characters I saw on Two and Half Men weren't even trying to be flesh-and-blood people.

Anyway, continuing on through the next scene: Dharma & Greg (?!) make a random cameo, as does John Stamos, and then we're treated to a couple of fart jokes between Grandma and Half-Man. After that, Jon Cryer chats to Charlie's urn of ashes for a while, trying to figure out where to spread them.

Enter Ashton. The audience whoops like it's the 1970s and he's the Fonze. Speaking of, I actually liked Ashton on That '70s Show. (But I digress. Summarizing this episode makes me want to digress a lot.) ANYWAY, Ashton's appearance at the window startles Cryer, who flings Charlie's ashes in the air, where, he's sure to point out, they'll be Dust Bustered later. Wa-wa.

(Not me. That's what it said onscreen at the end of the episode. "To be continued..." But I'll just have to live with the fact that I'll never know what happens.)

Did anyone else tune in to the premiere? And for those who regularly watch, what am I missing? Is it usually better? I'm willing to be convinced.

* A show which may have had too much heart in the last few seasons. I definitely suffered Ross/Rachel fatigue by the end

How a Dork Edits

While reading my manuscript, I realized to my embarrassment that I apparently have difficulty depicting the difference between weeks or months passing, so it's not always clear when everything is happening. So one of the first things I did before diving in to revisions was print out blank calendars! Fun!*

I then proceeded to fill in every major event, the exact day it occurs. It was dorky but made me feel settled, and ready to edit. 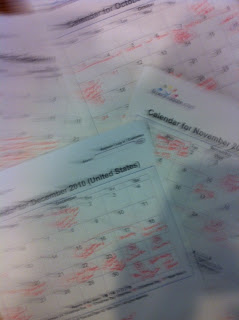 P.S. The photo is deliberately blurry as opposed to my usual "accidentally blurry." Can't give away all my plot secrets.

*I'm not being sarcastic. It was really fun!

What Makes a Good Editorial Letter?

I was nervous to open it, but once I did, I found myself nodding my head like a madwoman and feeling a rush of excitement as I realized how much stronger Maggie's changes will make the story, and how well she knows the characters.

What makes the letter so good?

1. Praise goes a long way. Maggie started out by telling me her favorite parts, which immediately set me at ease and reminded me it's all going to be okay; she likes the book! That's why she bought it!

2. It's very organized: the perfect recipe for revisions. It doesn't jump all over the place; it's divided into categories so I can follow along easily and see how everything fits together. I'm confident if I follow instructions, I'll end up with a delicious cake.

3. It's clear and specific. Maggie didn't give me vague suggestions like, "fix the humor/emotion/tension/romance/mystery [insert attribute]"; she clearly laid out exactly what she felt might be improved, and then gave precise examples of how and why. As I read the letter, I could immediately picture what I needed to do. (Now it's just a matter of getting down to it...)

The next morning, I woke up early, ripped open my new package of red pens (see above), and started jotting feverish notes in the margins of scenes I wanted to flesh out or change. It's been exhilarating so far. I've got work ahead of me for sure, but Maggie's notes were so helpful and spot-on to me that I won't feel "right" about my manuscript until I've made these changes.

I feel very lucky to have an editor who believes in my writing and could see things in it that I didn't see, and who's willing to work with me to create the best version of the story possible.

Dear Teen Me, and My First Online Interview

Have you checked out Dear Teen Me yet? It's a place for authors to address their teen selves and offer advice, comfort, warnings, and occasional pleas (my favorite remains: "Don't perm your hair").

Earlier this week I contributed a post about vague teenage dysthymia and the heartbreak of cat allergies, complete with photos of my hairsprayed '80s bangs and "why did these exist" striped jean shorts. Even more exciting, the creators of Dear Teen Me announced their anthology book deal! Wish them well here.

A few days later, I sat down for an online video interview with the wonderful Jeff Rivera of Author Learning Center. Jeff was a terrific interviewer who immediately put me at ease, and he didn't seem put off by my "I'm still getting over a cold, fear me" voice.

We discussed my upcoming book Bruised and YA books in general, touching upon what elements might make YA compelling to readers and how to create realistic dialogue.

I'll let you know where and when to find the video once it's been edited (and auto-tuned, haha).