Interview with Amy Spalding, author of INK IS THICKER THAN WATER 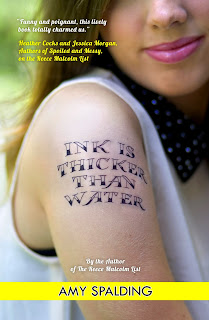 From Good Reads: For Kellie Brooks, family has always been a tough word to define. Combine her hippie mom and tattooist stepdad, her adopted overachieving sister, her younger half brother, and her tough-love dad, and average Kellie’s the one stuck in the middle, overlooked and impermanent. When Kellie’s sister finally meets her birth mother and her best friend starts hanging with a cooler crowd, the feeling only grows stronger.

But then she reconnects with Oliver, the sweet and sensitive college guy she had a near hookup with last year. Oliver is intense and attractive, and she’s sure he’s totally out of her league. But as she discovers that maybe intensity isn’t always a good thing, it’s yet another relationship she feels is spiraling out of her control.

It’ll take a new role on the school newspaper and a new job at her mom’s tattoo shop for Kellie to realize that defining herself both outside and within her family is what can finally allow her to feel permanent, just like a tattoo.

The Los Angeles release party for INK is in one month at Skylight Books! If you live in Southern California, come join the fun on January 18th at 5pm!

In the meantime, kick back and learn some more about Amy and INK, of which author Trish Doller (WHERE THE STARS STILL SHINE) says, "Spalding depicts a blended family with compassion, humor, love, and pitch-perfect authenticity."

Q: You recently traveled to your hometown of St. Louis, which also happens to be the setting of INK IS THICKER THAN WATER. Did you make it a point of visiting places the book references or alludes to, and did it feel any different being home now that your book located there is out in the world? How was the launch party? Did you meet up with anyone from your past? (Specifically who knew you as a teen?)

A: I absolutely went to places mentioned in the book, mainly lots of coffee from Mokabe's, but it wasn't so much because I mentioned them in INK but because these are the places I love going anyway. I liked being able to write about the places I love in St. Louis, particularly spots like Fitz's and Vintage Vinyl, where I logged A LOT of hours growing up.

Most of my friends in St. Louis have known me since I was in high school (or earlier, even) so there's a lot of history there. I just had to be careful writing about teenage hangouts and such that I checked my favorite places were all still open (the ones that weren't...HEARTBREAKING!).

Q: You have a beautiful and personal variety of tattoos that reference musical theatre as well as other passions of yours. Are there any tattoos you've seen on other people that stand out for you, in either good or bad ways?

A: Thank you! I love other people's tattoos, so, yes, absolutely, all the time. I usually get really envious when people are more inked than I am, because due to my dayjob, I know there are certain limits I need to hold myself to. So whenever I see amazing hand tattoos, for example, I get pretty dreamy.

Q: I think each of your contemporary YA books, THE REECE MALCOLM LIST and INK IS THICKER THAN WATER, would translate exceptionally well to an ABC Family series. What are your favorite teen-centric or family-centric shows? What makes them great for you?
A: That's totally my dream! I love ABC Family, and I love teen-centric and family-centric shows. I just watched all of THE FOSTERS that's available on Netflix, and it's completely up my alley. PARENTHOOD is probably my favorite (and the best) of family shows on TV. I also love love love THE CARRIE DIARIES and wish it got more credit for being such a good teen show, considering it has so little to do with SEX & THE CITY.

I was a big fan of The WB back in the day, and loved EVERWOOD, GILMORE GIRLS, and BUFFY. And probably my favorite family show ever is SIX FEET UNDER.

Q: What other TV shows, if any, inspire or teach you about character, setting, dialogue, or tone?
A: Definitely all the above, but I think any serialized TV show can be great for writers to watch (or at least I tell myself that when I'm mainlining shows on Netflix and not actually writing). Novel-writing and TV seasons have a lot in common, and there are lessons to take everywhere. There's hardly a better place to watch expectations pay off than SCANDAL. I'm not sure anyone has been so economical with writing as the BREAKING BAD staff, in that not a damn thing went to waste. PARKS & REC is a good reminder that you can still find comedy and drama in people mainly being good to each other. THE GOOD WIFE does great things like throw characters into interpersonal drama and then quickly remind you, the viewer, that these people still have to attend to other responsibilities like work, which is great for a YA writer because my characters still have school and extracurriculars and chores and such.