My New York City adventure continues, wheee. Just to back track for a second, here's the hotel where the RWA conference took place:

Which is right smack in the center of Times Square: 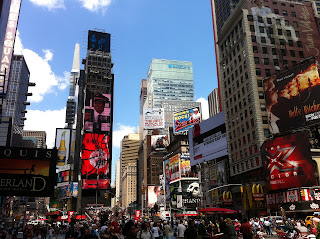 However, that's not where I stayed, because the amazing Sarvenaz Tash (author of The Mapmaker and the Ghost, coming out April 2012) allowed me and Miranda to crash at her uber cool pad in Brooklyn. As a result, I got to experience parts of the city I'd never been to before. One of my all-time favorite books is A Tree Grows in Brooklyn, so I was delighted to finally check the place out.

But back to the timeline.

Wednesday Morning: Sara Megibow's clients met up at the Marriott for coffee. It was really fun hanging out with everyone and chatting business and writing.

Below, top row from left to right: Aislinn McNamara, Roni Loren, Ashley March, Tiffany Reisz.
Bottom row, from left to right: Me, Allison Rushby (who traveled to NY from Australia!), Sara Megibow, and Steve Vera, who has lived an extraordinary life. 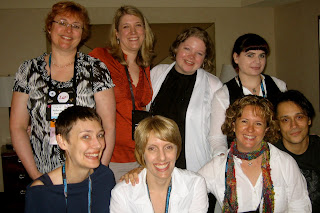 Not pictured is Miranda Kenneally, who had left a moment earlier to pick up some ARCs of her debut YA novel, Catching Jordan. Observe the gorgeousness:

Wednesday, Noon: I had lunch with Sarv, Miranda, and the lovely Katie McGarry, another Apocalypsie. I loved hearing about her upcoming book, Pushing the Limits (yay contemporary YA!). Then it was off to a rousing matinee at the theatre.
Wednesday Night: Allison, Sara, Miranda and I attended the YARWA event, with an all-editor panel. I mingled with some writers and snarfed several plates' worth of appetizers. We called it an early night to head back to Brooklyn, where Sarv treated us to a tour of her neighborhood.
Check out the Brooklyn Public Library: 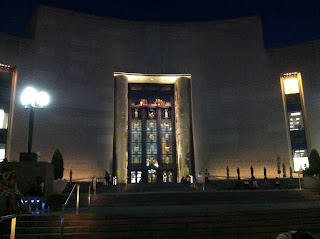 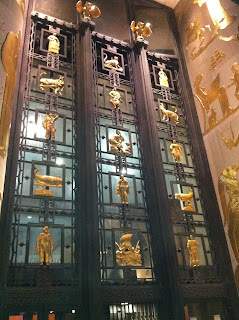 Not to mention the awesome Brooklyn Museum: 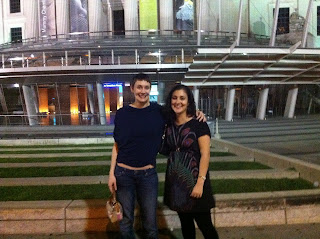 Next up was a Doctor Who-themed bar. Because it had a TARDIS. 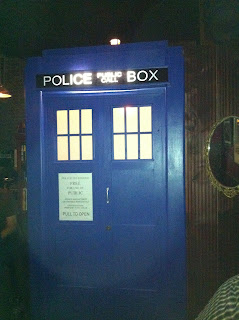 I used a sonic screwdriver to open it and reveal the depths -- okay, bathroom -- beyond. 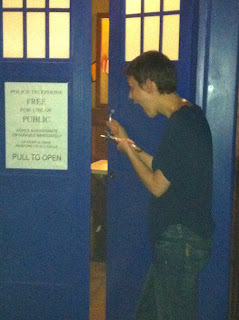 Thursday Morning: At this point I figured I should, you know, attend a conference event. The two biggest YA-related events were conveniently scheduled one after the other. I checked out "The Y.A. Romance Market: Advice from the Pros" (with Kristin Nelson, Rosemary Clement-Moore, Caridad Ferrer, and Aubrey Poole) and "Writing the Y.A. Bestseller" (with authors Simone Elkeles and David Levithan).
After that I had a hilarious lunch with Kristen Callihan and Lindsay Mergens, who helped me figure out how to walk to Central Park (a mere 13 blocks away). 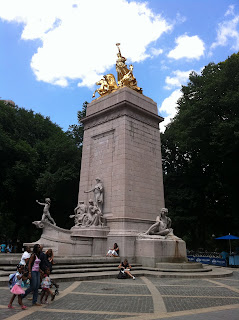 I rested in the park and then got lost on the subway trying to get down to NYU. (How First Season Felicity of me.) 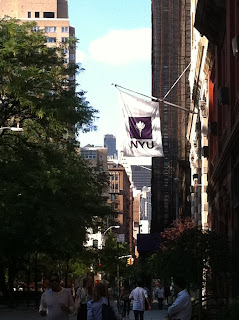 Thursday Night: I caught up with a college friend and saw another play (Through a Glass Darkly starring Carey Mulligan, whom I knew was brilliant from the film An Education. If you haven't seen it, go add it to your Netflix queue. Unless you've quit Netflix because of the 60% price hike announced this week.)
Friday Morning: Breakfast with Sarv at Tom's Restaurant (the inspiration for that Suzanne Vega song -- got it stuck in your head yet?).
Then I headed back to Manhattan for lunch with Sara Megibow and my super cool editor, Maggie Lehrman, who is wicked smart and so fun to chat with.
Here's me at the mod Abrams offices. I also swiped a copy of the Amulet Fall 2011 catalog; every cover looks like delicious candy to me. I absolutely love the artwork for the upcoming books. 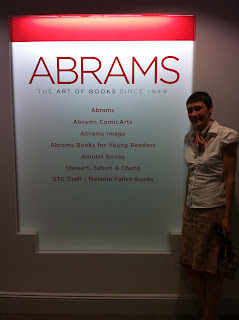 Friday Afternoon/Night: My flight from Newark got canceled and moved to JFK airport -- for the next morning with a layover (woooo!) So they had to give me hotel vouchers, roundtrip car vouchers, and meal vouchers. But the hotels at JFK were all booked, so they sent me to LaGuardia. I got to the hotel in Flushing, and on the front desk was a print-out with weather information. How's this for existential:

In case you can't see it clearly, it says, "Today will be about the same as yesterday."
Luckily, that was not the case for me in New York -- every day was uniquely wonderful and I had a blast at the conference. Thanks for flipping through the digital album with me.
at 8:33 AM