Before I ever knew she'd be designing the cover for my book, I'd admired her breathtaking work on such stand-out titles as SHINE and BLISS by Lauren Myracle, SPLINTERED by AG Howard, and ONE DAY AND ONE AMAZING MORNING ON ORANGE STREET by Joanne Rocklin. Check them out:

Here's Maria in her own words about her process, and how she came up with the cover for my martial arts-themed book, BRUISED (below, available March 5th!) 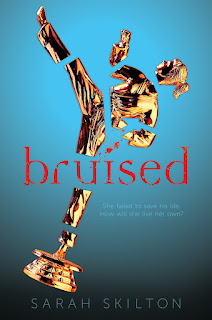 How did you get started in art design? Was it something you always hoped to pursue?
I was always one of those "artsy" kids, but didn't really get into graphic design until high school. I was the editor of my high school yearbook, so in addition to writing articles, I was also responsible for the theme and design of the book: creating spreads, placing photos, text, captions, sidebars, etc. (Which is pretty much what I do now!) Aside from appealing to my slightly OCD personality, I loved the creative process of bringing stories to life. Having this foundation, I went to art school and knew design was what I wanted to pursue.

Did you have a favorite book cover growing up?
Yes! The True Confessions of Charlotte Doyle by Avi. I thought the illustrated Charlotte Doyle—with her blue eyes and 80s wind-blown brown hair—was SO pretty. (I think I actually took the paperback with me to the hair dressed and said, I want my hair to look like that.) It's still one of my favorite novels.

Which covers stand out for you today as being particularly remarkable, evocative, or beautiful?
Oh, there are so many! One of my favorites is the Beautiful Creatures series designed by David Caplan. The third book in the series, Beautiful Chaos, literally called to me from the shelf in the bookstore. The typography is stunning and the special effects are perfect—especially the soft-touch matte lamination, which makes it impossible to put down. Bunheads, designed by Tracy Shaw, is another great cover, as is Chasing Lincoln's Killer designed by Phil Falco and Lizzy Bromley's insanely, incredible double-sided jacket for The Blessed.

How many sketches or drafts do you typically go through before a cover is finalized? Have you ever gotten it right with the first try?
It really depends on the project. For Lauren Myracle's Shine, I probably did something like 15 exploratory comps before landing on the right idea. With other projects, like Shelley Coriell's YA novel, Welcome Caller This is Chloe, my first idea ended up becoming the final.

How many books do you design for Abrams/Amulet a year, and how do you go about designing them? Do you jot down ideas as you're reading, or read first and brainstorm later? How did you go about it for BRUISED?
In the course of a year, I'll design/art direct about 25–30 titles. For novels, I like to read the manuscript first, 1) because I'm a big kid at heart and YA/middle grade fiction is still my favorite, and 2) I think the best ideas for covers come straight from the text. I'll sketch ideas/thoughts while I'm reading and then discuss them with the editor to make sure we're on the same page. I think editorial input is really helpful because most editors have a vision for a project and I like to use that vision as a spring-board for the design. Bruised happened exactly this way.

Many YA books in the past few years have used headless models, or partial images of teenage girls. Your cover for BRUISED is symbolic rather than literal, which I absolutely love. How did you come up with the broken trophy concept for BRUISED?
First off: I love this story! I took Tae Kwon Do as a kid, so Imogen's character appealed to me immediately. After reading an early manuscript, I knew there were three things I wanted to convey with the cover: the female narration, the sense of loss/brokenness, and the martial arts angle. My first comps were actually more literal and less symbolic, but I changed course after talking to the book's fabulous editor, Maggie Lehrman, who wanted something very iconic. So I started browsing stock photos for visual metaphors for martial arts, which is where I came across the trophy.

On its own, the trophy checked two of my three requirements—I just needed to add the element of brokenness. Separating the limbs from the body seemed like the most obvious way to show brokenness, so I didn't explore that right away. At first I tried making the trophy look rusted, then corroded, then burned, but those effects started to muddy the graphic approach. In the end, the clean breaks worked best. And splaying the limbs at weird angles rounded out the idea.

How important are colors when setting a tone, mood, and style? What mood were you hoping to evoke for BRUISED by using a gradient blue background, red title font, and a gold trophy? Are there any colors you generally stay away from?
Color is a powerful tool, ranking right up there with concept, composition, and typography. There really aren't any colors that I specifically avoid, but I do gravitate toward complimentary and primary color schemes, which I used for Bruised. Because the trophy is an orangey-gold, I knew it would pop on a darker background. Solid black was striking, but seemed a little too heavy, so I replaced it with blue (orange's compliment) and the gradient adds depth and brings the focus right to the trophy. It also gives a subtle sense of rising or transformation, which is key to Imogen's journey. I will admit that red is my favorite color (so use it a lot!), but I chose red for the display (or title) type because it vibrates ever so slightly on the blue background, and that creates a sense of tension that prepares readers for the story within.

Something I never realized until going through the publishing process is that art designers don't just focus on covers, but inside elements as well. Tell us a little bit about the inside design for BRUISED. How do you go about choosing fonts, spacing, chapter headings, page number placement, etc.? What factors go into your decisions?
As a book designer, it's my job to ensure that a book feels like a package deal. I view design as the glue that aesthetically holds a book together. Continuity in design can add to the storytelling process when all of a book's elements (fonts, end papers, margins, jacket effects, folios, etc.) work together to carry the theme of the book from cover to cover.

For novels, the design process almost always begins with the cover, so a book's interior should feel like an extension of the cover. With Bruised, the cover is minimal and graphic, so I wanted the interior to mirror that aesthetic. Being the typography-nerd that I am, I like to believe that the main body font sets the tone for the text, so I always begin there. I wanted a more angular, slightly modern serif that would pair well with Democratica, the display type, so I chose Spectrum (designed in 1952 by Jan van Krimpen) because it has those qualities as well as a vulnerability that seemed fitting for Imogen's character. The chapter pages are very minimal, containing just one illustrated element: the blood spatter from the cover. I reused the display type for the chapter numbers and folios because the Democratica letterforms are quirky and add visual interest.

As a reader and designer, I love generous margins, so I always try to incorporate that into my design. But with Bruised in particular, I wanted to balance the tension of the cover with a delicate lightness that would flow from page to page.

I would say you did a fabulous job, Maria. Thanks so much for answering my questions, and for creating such a terrific cover for BRUISED!
at 6:00 AM